‘THE CLASSICAL DUO’ (as seen on tv) WILL DELIGHT AUDIENCES WITH THEIR CAPTIVATING PERFORMANCE.

After over 5 years of performing together Hayley Moss & Ben Lake have become popularly known as 'The Classical Duo'. Both have been used to performing solo but after meeting they decided that they would team up and see what response they would get to becoming a possible duo.

Since then with the help of singing at Norwich City Football Ground and busking in the City of Norwich the response has been overwhelming and the pair are now appearing at events throughout the country and overseas. Their CD album 'the best of' is also available to buy. Please email if you would like to receive a copy.

Hayley Moss (also known as Norfolks Street Soprano) started busking in the streets of Norwich back in the summer of 2015. With no former training Hayley was very anxious not knowing what response she would receive from the public when she first made her first attempt to busk. People stopped and within minutes Hayley had gathered a crowd from the public who were in awe of her heavenly notes echoing throughout the streets of Norwich.
​
Since then Hayley's' career has escalated and she has performed at Norwich Football Ground and also performed at the London Palladium as part of ITV's show 'Tonight at the London Palladium.

Ben Lake is an Award Winning West End and International Artist. Working globally for the last 20 years, including London's Phantom of the Opera and Jerry Springer the Opera, and with a recent appearance on BBC 1's 'The Voice', Lake has secured himself as one of "Britain's Best Classical Voices". 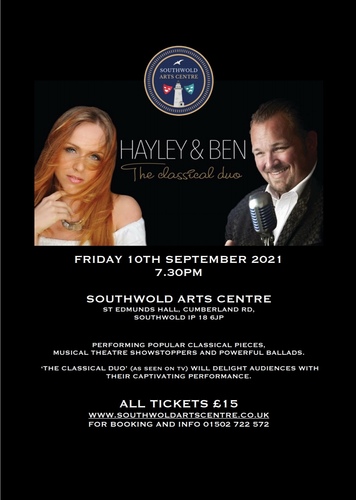