In association with The Place Bedford, Unite the Union and University of Manchester

a new musical play by Neil Gore celebrating the 50th Anniversary of
the Upper Clyde Shipbuilders’ “Work-In” of 1971-2.

With the massive Glasgow and Clydebank shipyards facing closure and the incumbent Tory government refusing to invest in what they called ‘lame-duck’ industries,
‘Yes! Yes! UCS!’ is the story of how two women workers on the fringes of an industry facing imminent closure are drawn into the monumental heroic battle to save the jobs of thousands, as well as the traditions, skills and good name of Scottish shipbuilding,
and how their view of the world would be changed forever.

Through Townsend Theatre Productions’ trademark gritty drama,
audience interaction and live music from the early 70s,
community solidarity, collective resistance and workers’ control
are seen to be inspired through the ‘Work-In,’
led by organised shop stewards, including Jimmy Reid and Jimmy Airlie,
attracting huge national and international support
on the way to a celebrated victory.

John Lennon and Yoko Ono sent a bunch of roses
with message for the people of Glasgow; it read:
“Power To The People!” 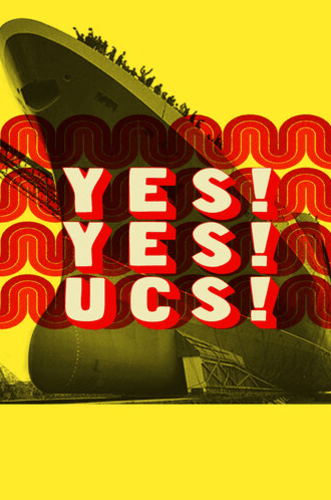