A blackly comic triangle of love, jealousy and hate played out between a husband and wife about to celebrate their silver wedding.

Mor and Ruth live in an upstairs apartment near the Lighthouse in Southwold. She’s a vegan activist ex-actress, he’s a professional bore. He’s made their marriage a tyranny, with his drinking, his hypochondria, and his unhealthy obsession with the Southwold Summer Theatre.

The mix is already volatile when dark secrets begin to emerge. On the eve of the anniversary, Ruth’s old flame (and cousin) Carl arrives. Carl is divorced, and on this visit he learns that it was Mor who encouraged his wife to leave him, and helped persuade the court to award custody of the children to Carl’s wife. The atmosphere turns deadly, as a fatal three-cornered dance of hate and jealousy becomes a dance of Death In Southwold.

Death In Southwold by Robin Brooks A comic re-interpretation of Strindberg’s ‘Dance of Death’ With Mark Spalding, Barbara Dryhurst and Nicholas Murchie Directed by Fiona McAlpine 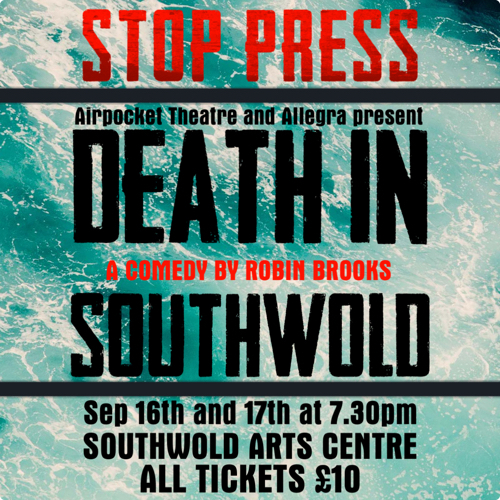