Alan Barnes is a prolific international performer, composer, arranger, bandleader and touring soloist. His range and brilliance have made him a “first call” for studio and live work since his precocious arrival on the scene more than thirty five years ago.

He has made over thirty albums as leader and co-leader alone, and the list of his session and side-man work includes Bjork, Bryan Ferry, Michel Legrand, Clare Teal, Westlife, Jools Holland and Jamie Cullum. He has toured and played residencies with such diverse and demanding figures as Ruby Braff, Freddie Hubbard, Scott Hamilton, Warren Vache, Ken Peplowski, Harry Allen and Conte Candoli.

Tonight, appearing with Southwold Jazz Club favourites, the Chris Ingham Trio, Alan will display his virtuosity on saxophones and clarinet in a mix of material from the Great American Songbook and the cool school of ‘50s jazz, delivered as ever with is unique brand of wit and warm humour.

His stylistic range is quite phenomenal… He has a wonderful capacity for suggesting a given style without actually imitating anyone.
Dave Gelly, Masters Of The Jazz Saxophone.

I was relishing the prospect of Barnes’s casually consummate musicianship, deadpan humour (he could be a comedian, if jazz ever fails him), and indomitable belief in a respected place for the music’s rich history in this eclectic and often forgetful world.
John Fordham - The Guardian.

Barnes plays music that was radical 50 years ago but he infuses it with so much passion and energy you could believe it was minted on the spot, which is always part of the story with jazz.
John L. Walters, The Guardian. 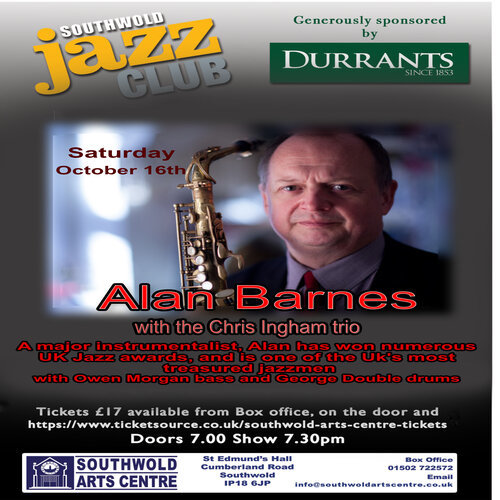