Stand Up In Southwold

A comedy night not to be missed!!

The first comedy night at Southwold Arts Centre presented by the region’s finest comedy promoters WCB Comedy. This special show is headlined by Georgia-born Reginald D Hunter whose searingly honest observations both onstage and on TV and Radio have garnered him a cross-generational fan base.

During that time he has become one of the Comedy industry’s best-known performers for his distinctive take on the most diverse range of subjects. Brutally honest and is often considered to be controversial but it is always meticulously thought out and he has never been afraid to face challenging issues head on even when the focus is on his own principles or beliefs.

His TV appearances have included Never Mind the Buzzcocks, QI and Have I Got News For You?

Reginald regularly sells out tours throughout UK and Ireland and he has been seen by audiences around the world from America to Australia.

“A cerebral comedian with every performative grace in his back pocket”

Our opening comic, Rory O’Hanlon is a regular face on Irish TV who featured on RTE’s New Comedy Award, Republic of Telly alongside Des Bishop in Under the Influence.

“Possessing the quintessential gift of spinning a tale with total ease” Spoonfed London. ★★★★★

Our experienced MC is WCB favourite and Cambridge funny man Jason Stampe. Jason’s assured and matey persona can make the largest audience feel like they’re laughing in the comfort of their own living room and is a perfect fit to knit together this exceptional first night of comedy at Southwold Arts Centre.

To book via email please use: Boxoffice@southwoldartscentre.co.uk 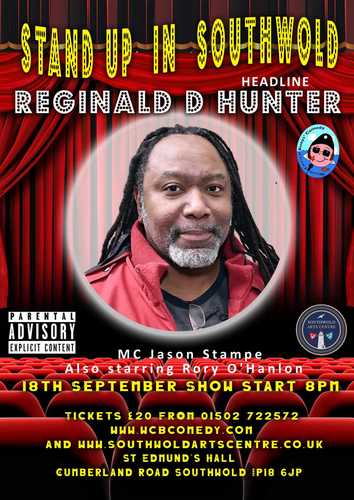