Creator of the world renowned Lee Nelson act headlines our next comedy line up at 'Stand up in Southwold.'

Simon breaks away from his high selling UK tour to headline this special evening of comedy on November 14th.

Our opener, Scott Bennet is a stand-up comedian and writer whose star is most definitely on the rise.

This month is likely to be the beginning of a break through period because things have started to get stratospheric for Scott who announced on his own social media, “Absolutely unbelievable month! Last night I filmed live at the Apollo!”

The show, filmed last month, is set to be aired later this month. However, you can see him first at this fantastic gig at Southwold Arts Centre.

Our MC for the evening is the fantastic Dana Alexander.

Dana is a regular fixture on the British Comedy circuit performing at clubs like, The Glee, The Comedy Store, Komedia and The Stand.

After being nominated for “Best Club Comic” by Chortle and for “Best Female Comedian”, “Best International Act” and “Funniest Comedy Moment” by the Black Comedy Awards she has since made her debut on British television appearing on BBC 3’s Russell Howard’s Good News and the Edinburgh Comedy Festival Gala.

Fantastic up and coming acts Louie Green and Lee Hudson complete this amazing night of comedy. 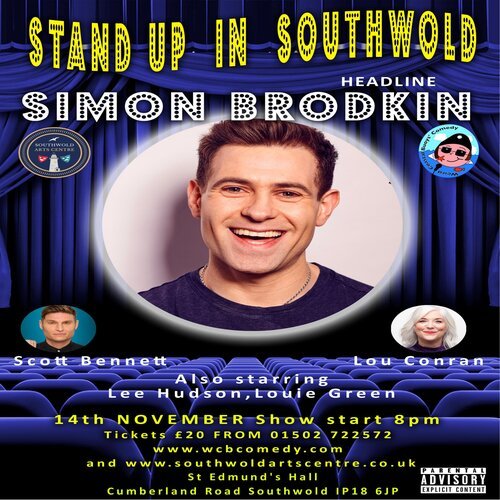